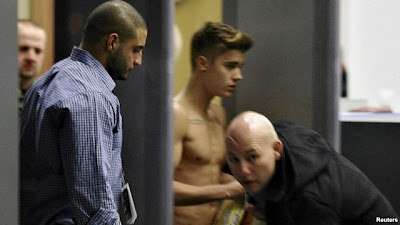 Teenage pop star Justin Bieber paraded through a Polish airport shirtless before flying out of the country, adding to a string of peculiar incidents that have plagued his European tour.

The Canadian singer had previously been spotted wearing a bizarre gas mask on a night out in London, where he turned up late for one concert and collapsed on stage with shortness of breath during another.


After a sold out concert in Lodz, central Poland, the 19-year-old took off his shirt in a car as it drove up to the airport late in the night on Monday.

He then walked topless to the airport building - in temperatures of about -10C (14F) - and then on to his gate, only to get dressed again before boarding a private jet.

"He wasn't told to take off his clothes. He had no metal objects on him.'' a spokeswoman for Lodz Airport told Reuters. "He's quite skinny so I assume he was probably freezing.''

Concert organizers put the incident down to a "Bieber eccentricity".

The show in Lodz was the 19th European concert of Bieber's "Believe'' tour. The next one is due to take place in Munich, Germany, on March 28.

Discovered on YouTube in 2008, Bieber is one of the pop world's biggest stars and has built up an online following of tens of millions of fans. 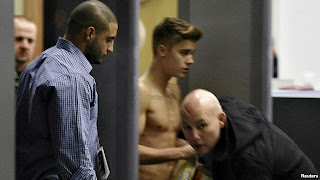