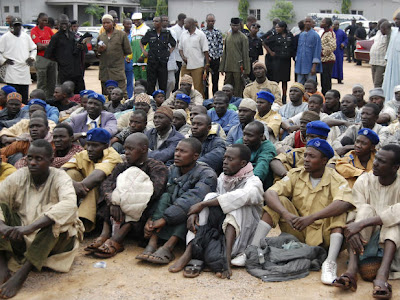 A Chadian with explosives, arms and ammunition was arrested by  Joint operatives from Department of State Security Service (DSS) and the military in Ijora Badiya on Lagos Mainland.

we all need to be really watchful hmmm


the residents of Ijora Badiya fed the police with information that led to the arreast that a strange man had been making some suspicious movements in the area. The suspect whose identity remains a secret for now, was alleged to have rented a mini-flat in the area since the past one month.
He was said to have been making some suspicious movements and after last Monday’s multiple bombings of the Luxury Bus Park in Kano metropolis, residents of Badiya became afraid and reported him to the DSS. The DSS was said to have mounted surveillance on the man and after confirming the fears of their informants, they contacted the military.


Recall that the Islamist sect began its reign of terror soon after its leader, Mohammed was killed alongside many followers by security forces in 2009. Boko Haram which translates to Western Education is Evil, had targeted both Christians and Mulisms.
Post by Unknown at 10:21 am
Email ThisBlogThis!Share to TwitterShare to FacebookShare to Pinterest