Zendaya Won't Play Aaliyah In Lifetime Television Movie After All—Find Out Why. 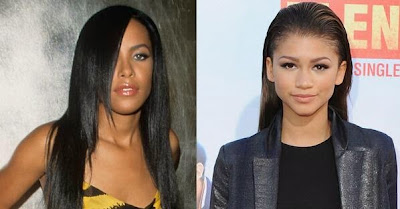 Reports has it that Disney Channel star and singer Zendaya will not play Aaliyah in a Lifetime Television movie after all.
A rep for the 17-year-old actress told E! News exclusively on Sunday, June 29, that "Zendaya is no longer involved in the project." Lifetime, which had announced her casting in the biopic on June 16, has not commented.

A source told E! News that there were production issues, including problems obtaining the rights to Aaliyah's music. The R&B star and Queen of the Damned actress died at age 22 in a plane crash on Aug. 25, 2001.
Post by Unknown at 8:15 pm
Email ThisBlogThis!Share to TwitterShare to FacebookShare to Pinterest
Labels: aaliyah